Lewis Nursery was established in 1907 by J.M. Lewis and his two sons, Jeremiah and Jesse Monroe. We used to operate under the name of J.M. Lewis & Sons in a small village called Lone Oak, Virginia. Then the nursery was devoted to growing fruit trees.

After years of business, we realized that the land we were planting in was not well suited for nursery production. In 1913, we moved to Cascade, Virginia. Our new farm in Cascade consisted of nearly 300 acres and extended to a nearby railroad junction, from where the shipping used to take place. 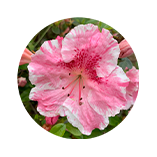 Rough times came when World War I occurred. Nursery operations curtailed to nearly nothing from 1916 to 1918. The nurserymen resorted to farming to feed their families. However, all 10 acres of the farm were lost due to a lack of income.

Post wartime was good for the nursery. Fruit trees began selling again and several varieties of shrubs and trees that were added in our inventory. Overall acreage of the farm had grown up to 150 acres. Unfortunately, in 1929, hardship emerged for the second time. Customers had no money to buy plants nor pay for what they had already purchased. Luckily, they had a good stock of trees and shrubs, which was used for trading cattle, hay, hams, automobiles, clothes, gas, and more. The nursery survived the depression phases and continued operations later on. In 1932, the nursery changed its name to J. Lewis & Sons due to Jesse Monroe moving to West Virginia and J.M. Lewis passing away.

At this time, Jeremiah Lewis’s sons William Herbert and James Lewis Sr., along with their grandson William Herbert Lewis, Jr., became the owners of the nursery. Also, more trees and shrubs began to take the place of the fruit trees as time went on. The farm had 450 acres added to it, though, only about 100 acres out of the 600 was nursery production. Around this time, the majority of nursery stock was wholesale trade. The final change to the company name occurred in 1968 and was renamed as Lewis Nursery.

By 1990 William Herbert Lewis III became the sole owner of the business. Since then, the nursery has grown to nearly 20 acres in container production, over 200 acres of field production, and an acre of pot-in-pot. The nursery continues expanding to meet the demands of the plant industry, while the next generation prepares to keep running the family business.